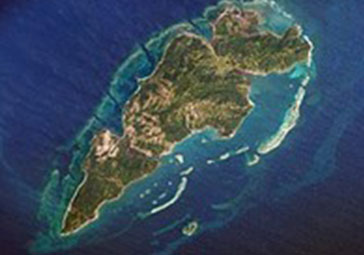 Guanaja is one of the three major islands that make up the archipelago of the Department of Islas de la Bahía (Bay Islands), in the Caribbean of the Republic of Honduras. It has been described as the Venice of Honduras because of the water paths that run through it.

Approximately 6000 inhabitants live in Guanaja. It is an island much visited by divers for its warm and crystalline waters that support part of the second largest coral reef in the world that is located around the entire island of Guanaja. It is also visited by nature lovers, biologists who want to know the island’s biodiversity, trees and other plants, and animals.

Guanaja is considered the mountain with the most waterfalls in Honduras, as it has more than 10 waterfalls.

Guanaja is located approximately 70 kilometers north of the Honduran coast, and 12 kilometers from the island of Roatan. One of the Guanaja keys is also called Guanaja or Bonacca, or simply “The Key”. The main town is called Lower Cays, an abbreviation of the English “The Key” or “El Cayo”. Bonacca is the name that the island had formerly, during the time it was a British colony, of which the settlers are of that descent. The island, together with the South West Keys, Shane’s, Hog, Pond, Flower Pot, Catherinne, Halfmoon, Channel, Crown, Clark, Stuart, Josh, Hendricks, George, and North East, form a municipality created in 1887 by government decree , as part of the department of Islas de la Bahía (Bay Islands).

The cool season lasts for 3.9 months, from December 12 to April 7, and the average daily maximum temperature is less than 27 ° C. The coldest day of the year is January 30, with an average minimum temperature of 21 ° C and an average maximum of 26 ° C.

The most common means of transport are boats and motorboats, a local channel known as The Cut (the cut) allows access from the south to the north of the island without having to go around it. Guanaja has the Guanaja airport (GJA), planes travel to and from La Ceiba airport. There is a highway, from Mangrove Bight to Savannah Bight since 2006, with little car traffic.

Once you get to the island, the best way to get around the keys is by water-taxi. These boats will take you with all the security measures to hotels, restaurants and attractions. The price is between 50 and 300 lempiras, depending on the distance traveled. 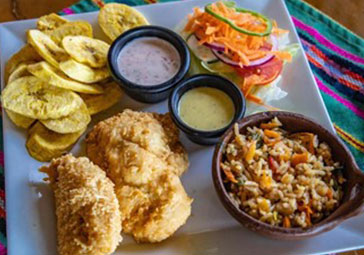 The typical dishes of Guanaja are prepared mainly with seafood. The delicious snail, clam or crab soup stand out among all of them.

At all times you can find fried fish accompanied by slices of banana, also snail ceviche, lobster, seafood soup, covered with fish, rice and beans. Coconut tablets and squash in honey are among the desserts.

When visiting the Bay Islands, you can’t miss trying lionfish. Lionfish have altered the marine ecosystem at many sites in the Caribbean. Eating it is one of the best ways to curb it. We assure you that it is a delight!