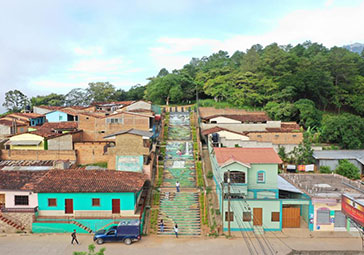 It is the largest municipality in Honduras, located, coincidentally also, in the country’s largest department, Olancho. The extension of Catacamas is 7,173.89 km².

The City of Catacamas is located between 14 °; 54 ’, 04”, North latitude and 85 °; 55 ’, 31”, from the Greenwich Meridian. Located in a valley 450 meters above sea level, it has to the north the exuberant Montaña Piedra Blanca (White Rock Mountain), part of the Sierra de Agalta National Park, with a great variety of botanical species, such as conifers, broadleaf plants, some 80 species and varieties of orchids and a large fauna that includes felines and quetzals. To the west rises the lower mountain of Balsam.

This geographical position has put it on the tourist map of Honduras, however it also offers alternatives to visit the Sierra de Agalta National Park, it is the gateway to the Río Plátano Biosphere Reserve through the municipality of Dulce Nombre de Culmí and the Patuca National Park.

Currently, the El Aguacate Regional Airport has been built and inaugurated, in what was formerly the Military Air Base, its runway will be able to receive aircraft of important dimensions.

Beyond, 5 km to the east, are the world-famous Talgua Caves, discovered in 1994, where the “Shining Skulls” were recently discovered, part of the skeletons of indigenous Pech who died three thousand years ago.

About 6 km to the south runs the auriferous Guayape, which together with the Guayambre form the Patuca River, which is the largest in the country, after Segovia. Between both, the Cordillera Entre Ríos, belonging to the Municipality of Catacamas, is understood. 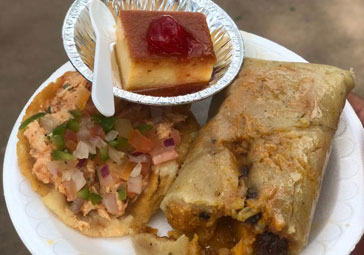 Famous for its dairy products (cheeses, cream butter and sack butter), as well as for its typical dishes, such as: tapado olanchano, corn rice soup, casserole, traditional nacatamales and also for the now traditional coyol wine that is extracted only in the Easter season.

Apart from the fact that always at this time of Holy Week, it is very common to prepare meals derived from fish, families on Holy Fridays usually prepare foods such as: Fried fish, fish soup or fish in eggs, among others.

Also something very well known of its gastronomy are the delicious donuts, made by the best artisan hands in the municipality. Also for Christmas something very traditional in Catacamas, is the preparation of Christmas cakes, made from dough and meat and a little sugar is sprinkled on top.